Michael Kenny has recently published a book ‘Proclamation of the Irish Republic, 1916: The title deed of Irish Republicanism’. The book which has been produced by the National Museum of Ireland, which not only tells the story of the relevance of the proclamation and the men who wrote it but also how it was actually printed. Bearing in mind the secret nature of the ‘Rising’, a document alluding to such an event would also have to be manufactured in the utmost secrecy.

In the book’s synopsis, Kenny describes “The Proclamation of the Irish Republic was and remains one of the most powerful and iconic documents in modern Irish history. It is important to remember that, in terms of language, it is a document of its time and for its time.” He then goes on to describe how it has shaped all those the politics and policies of those who seek Irish Independence than and since.

The book begins with examining the historical context in which the proclamation is set, the similarities it has with other countries that declared their independence such as the U.S. and India. Also, how it falls into line with a legacy of forerunning proclamations from previous Irish insurrections, highlighting the radical and emancipatory chains of thought that bound these documents, such as universal suffrage and the ownership of economic interests. That the language used, resembled that of revolutionary movements across contemporary Europe.

Though it does offer criticism of the 1916 Proclamation as well, that wasn’t as radical as some of the previous proclamations.

The book then delves into the actual production of the document, which by all accounts it seems Pádraig Pearse was 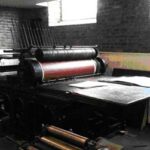 the main author, with James Connolly also adding his input and possibly Thomas MacDonagh as well. After they had finished the final draft, the document had then been passed on to the Military Council to be given clearance.

James Connolly took on the task of getting it printed in which entrusted to three printers, Christopher Brady, Liam Ó Briain and Michael Molloy. Who had worked with him previously on the newspaper ‘The Workers’ Republic’.

The three men set to work under armed guard in Liberty Hall on Easter Sunday morning and Proclamation was written on an old Wharfedale printer that had seen better days which caused few problems for the men. They also had insufficient letters for the full document, which lead it to be printed in two halves. The shortage of letters meant that different types of font had to be used as well as other improvisation, such as using wax on one instance to turn a capital F in a capital E. After working through the day and into the early hours of Easter Monday morning the document was finally ready.