The O’Donovan Rossa 1916 Society, Loughshore have organised a wreath-laying Ceremony for Óglach Paul Duffy on Sunday 25th February at 4.30pm In Ardboe Car Park. Everyone welcome. 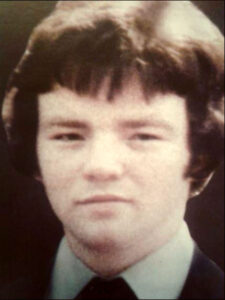 Vol. Paul Duffy was 21 years old when he was murdered by British undercover forces on 26th February 1978. A statement issued by the I.R.A. at the time of his death said “When he and a companion left the hay barn they were called to halt by soldiers who had the area stalked out for some time and who where in a position to arrest Volunteer Paul Duffy, who was unarmed. He raised his hands in the air to show that he was giving himself up but was shot in the forehead from a short distance. At this, his comrade made off and was seriously wounded by the gunfire.

The wounded man drove to Mullinahoe Parochial House but when the local priest reached the scene of the shooting intending to administer the Last Rites, he was told by the British Army that there was no one there. later that evening he was called by Coagh R.U.C. to the scene and shown the body.

Paul Duffy was a well known and liked young man. Members of Ardboe and Brockagh G.F.C. formed a guard of honour at his funeral in the Church of the Most Blessed Sacrament, Mullinahoe.

All welcome and for more information get in touch through our dedicated Facebook Events Page or contact our National Organiser via email at: info@www.1916societies.ie.