As Brexit is rolled out and it’s showing itself up to be the fiasco always promised to be, the position of big house Unionism is growing ever more precarious- particularly that of the DUP. In aligning itself with ‘Bumbling Boris and Hardline Brexiteers’. The DUP are scrambling to deflect away from their own failures as the implications of a disastrous Brexit are starting to come to the surface and it has become clear how they have been DUP’ed by Boris and his cabinet in their flip-flop decision making. Although not to be outdone, the UUP’s Doug Beattie and the TUV dinosaur Jim Allister have also been sabre-rattling around the issue. Doug Beattie is claiming the British Crown forces would need European consent to enter the Six Counties and Jim Allister is tweeting about a DUP run department’s refusal to comment on whether there will be a ban on muddy boots entering the North. 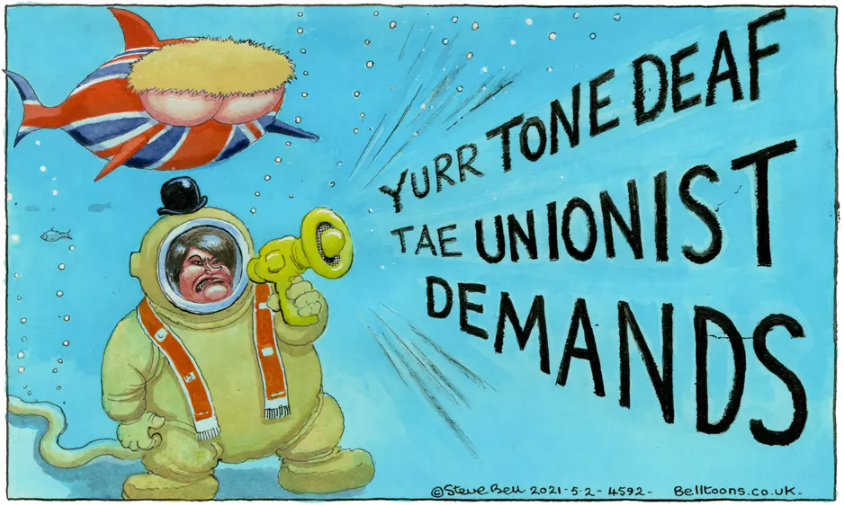 Amidst these shambles the European Union tried to trigger article 16 to retain stocks of the Covid vaccine, something which it later described as a mistake. In an almost comic fashion to placate fears and to reassure people around the issue something I’m sure wasn’t lost on the Unionist population, Eric Mamer an EU chief spokesperson insisted ‘only the Pope is infallible’. The DUP’s Jeffrey Donaldson also added to the hysteria by complaining about an internal border in the middle of the country separating it into two, although I doubt the irony was lost on Jeffery.

In a more sinister turn of events, the department of agriculture had to suspend food checks at Belfast and Larne ports after the Mid and East Antrim council withdrew their employees because of threats against them. Although there were claims of simmering tension within the Loyalist community around the Irish sea border, no evidence whatsoever was found that they were behind the threat. There is a clear and dangerous effort across Unionism and some elements of the media to ratchet up the tension in the PUL community over this issue. You know the DUP has run out of options when calls for Unionist unity and plays the Orange card, playing on siege mentality and circling the wagons. Instead of owning up to their mistakes the DUP have sought to blame everyone but themselves ignoring the fact that they propped the Tory government that negotiated these arrangements on their behalf.