We in the 1916 Societies made a collective decision many years ago not to waste our time and energy on attacking Sinn Fein, we believe that they are no longer part of the Republican project and their own actions would do more damage to them in the eyes of the people than any criticism or condemnation from us.
We believe that their campaign for a border poll which is completely controlled by the British is a fallacy, its inbuilt triple lock mechanism and beguiling wording will ensure that a united Ireland will never be achieved through it and certainly not a 32 County Republic of any sort, as Liam Mellows stated during a debate on the treaty,
“It is a fallacy to believe that a Republic of any kind can be won through the shackled Free State. You can’t make a silk purse out of a sow’s ear. The Free State is British-created and serves British Imperialist interests. It is the buffer erected between British Capitalism and the Irish Republic”. 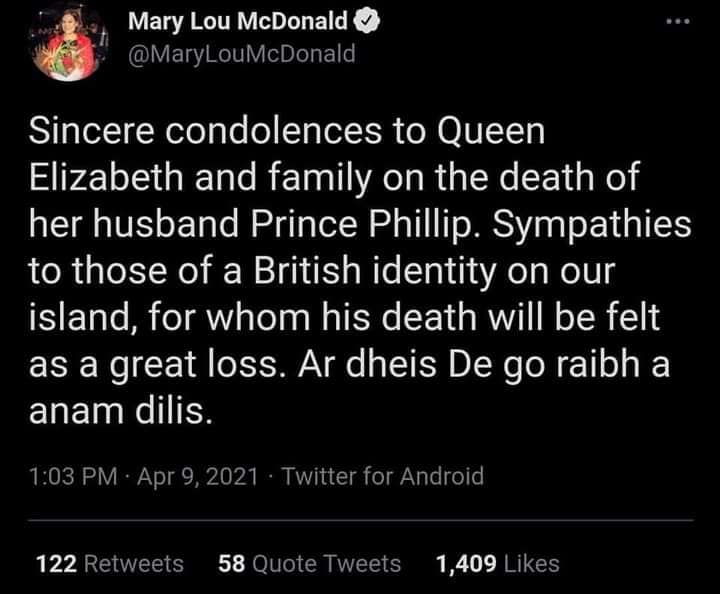 It is a case of history repeating itself, the Good Friday Agreement is British created, its institutions are nothing but shackles which have been skillfully used by the enemies of Ireland to deviate a movement which once stood for a 32 county socialist Republic, any outcome or concessions granted will be just another buffer erected between British/EU capitalism and the Irish Republic.
We believe it truly sad that the former Republican movement has moved so far from its once stated ultimate goal of a 32 county socialist Republic, it is particularly galling that on the 40th anniversary of the election of Bobby Sands to represent the people of Fermanagh and South Tyrone groveling statements would be issued on the death of a British monarch. Statements that shamefully eulogies a particularly nasty misogynistic racist member of a monarchy that for centuries has committed heinous crimes against our people and humanity.
It is important to state unequivocally that we are Irish Republicans, Sinn Fein does not speak on our behalf or on behalf of Republicans across this island.
When Ian Paisley demanded that Sinn Fein be house trained we never envisaged they would become so subservient, Paisley stated
“Sinn Fein’s leader Gerry Adams says we want to humiliate the IRA. There’s nothing wrong with that. I think it’s a very noble thing.
The IRA needs to be humiliated. And they need to wear their sackcloth and ashes, not in a backroom but openly. And we have no apology to make for the stand we are taking”.
Throughout Irish history the British were able to secure the services of Irishmen and women to serve their imperialist interests, by intimidating half or purchasing the other half, Sinn Fein are the latest manifestation of this disease, they now thread a well-worn path taken by the Gombeen Garrison class, the Redmondites, the Castle Catholics, the Freestaters and the SDLP. 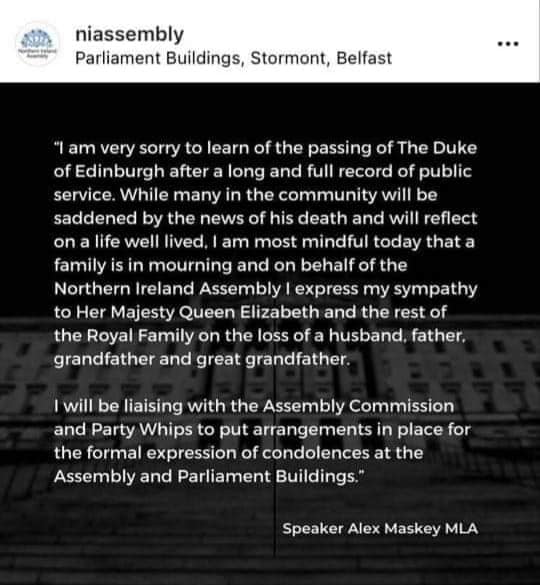 James Connolly articulated his sentiments and feelings towards these people far better than we ever could.

Fellow-Workers,
As you are aware from reading the daily and weekly newspapers, we are about to be blessed with a visit from King George V.
Knowing from previous experience of Royal Visits, as well as from the Coronation orgies of the past few weeks, that the occasion will be utilised to make propaganda on behalf of royalty and aristocracy against the oncoming forces of democracy and National freedom, we desire to place before you some few reasons why you should unanimously refuse to countenance this visit or to recognise it by your presence at its attendant processions or demonstrations. We appeal to you as workers, speaking to workers, whether your work be that of the brain or of the hand – manual or mental toil – it is of you and your children we are thinking; it is your cause we wish to safeguard and foster.
The future of the working class requires that all political and social positions should be open to all men and women; that all privileges of birth or wealth be abolished, and that every man or woman born into this land should have an equal opportunity to attain to the proudest position in the land. The Socialist demands that the only birthright necessary to qualify for public office should be the birthright of our common humanity.
Believing as we do that there is nothing on earth more sacred than humanity, we deny all allegiance to this institution of royalty, and hence we can only regard the visit of the King as adding fresh fuel to the fire of hatred with which we regard the plundering institutions of which he is the representative. Let the capitalist and landlord class flock to exalt him; he is theirs; in him they see embodied the idea of caste and class; they glorify him and exalt his importance that they might familiarise the public mind with the conception of political inequality, knowing well that a people mentally poisoned by the adulation of royalty can never attain to that spirit of self-reliant democracy necessary for the attainment of social freedom. The mind accustomed to political kings can easily be reconciled to social kings – capitalist kings of the workshop, the mill, the railway, the ships and the docks. Thus coronation and king’s visits are by our astute neversleeping masters made into huge Imperialist propagandist campaigns in favour of political and social schemes against democracy. But if our masters and rulers are sleepless in their schemes against us, so we, rebels against their rule, must never sleep in our appeal to our fellows to maintain as publicly our belief in the dignity of our class – in the ultimate sovereignty of those who labour.

What is monarchy? From whence does it derive its sanction? What has been its gift to humanity? Monarchy is a survival of the tyranny imposed by the hand of greed and treachery upon the human race in the darkest and most ignorant days of our history. It derives its only sanction from the sword of the marauder, and the helplessness of the producer, and its gifts to humanity are unknown, save as they can be measured in the pernicious examples of triumphant and shameless iniquities.
Every class in society save royalty, and especially British royalty, has through some of its members contributed something to the elevation of the race. But neither in science, nor in art, nor in literature, nor in exploration, nor in mechanical invention, nor in humanising of laws, nor in any sphere of human activity has a representative of British royalty helped forward the moral, intellectual or material improvement of mankind. But that royal family has opposed every forward move, fought every reform, persecuted every patriot, and intrigued against every good cause. Slandering every friend of the people, it has befriended every oppressor. Eulogised today by misguided clerics, it has been notorious in history for the revolting nature of its crimes. Murder, treachery, adultery, incest, theft, perjury – every crime known to man has been committed by some one or other of the race of monarchs from whom King George is proud to trace his descent.
“His blood has crept through scoundrels since the flood.”
We will not blame him for the crimes of his ancestors if he relinquishes the royal rights of his ancestors; but as long as he claims their rights, by virtue of descent, then, by virtue of descent, he must shoulder the responsibility for their crimes.
Fellow-workers, stand by the dignity of your class. All these parading royalties, all this insolent aristocracy, all these grovelling, dirt-eating capitalist traitors, all these are but signs of disease in any social state – diseases which a royal visit brings to a head and spews in all its nastiness before our horrified eyes. But as the recognition of the disease is the first stage towards its cure, so that we may rid our social state of its political and social diseases, we must recognise the elements of corruption. Hence, in bringing them all together and exposing their unity, even a royal visit may help us to understand and understanding, help us to know how to destroy the royal, aristocratic and capitalistic classes who live upon our labour. Their workshops, their lands, their mills, their factories, their ships, their railways must be voted into our hands who alone use them, public ownership must take the place of capitalist ownership, social democracy replace political and social inequality, the sovereignty of labour must supersede and destroy the sovereignty of birth and the monarchy of capitalism.
Ours be the task to enlighten the ignorant among our class, to dissipate and destroy the political and social superstitions of the enslaved masses and to hasten the coming day when, in the words of Joseph Brenan, the fearless patriot of ’48, all the world will maintain
“The Right Divine of Labour
To be first of earthly things;
That the Thinker and the Worker
Are Manhood’s only Kings.”