Comrades & friends once again we gather in Abour hill to commemorate a giant of Irish labour James Connolly. We are here as an expression of our continued opposition to British imperialism and partition and to reaffirm our commitment to the Struggle for National unity political and economic independence and national sovereignty. We must remember his politics learn from them and use this knowledge to advance our struggle today & into the future. As we gather here today it’s 101 years after the execution of James Connolly. Socialism is what we want everything from The Plough to the stars. Lots of political parties and groups claim James Connolly as their inspiration. Well I have news for them James Connolly was a Socialist, a Marxist, an anti-imperialist, an internationalist & a trade union organiser. You cannot cherry pick. He would have no truck with the imperialism of the European Union and he would laugh at the deluded suggestion of using Brexit and membership of the European Union as a means to uniting the country by surrendering our national sovereignty & democracy to the imperialism of the European Union. 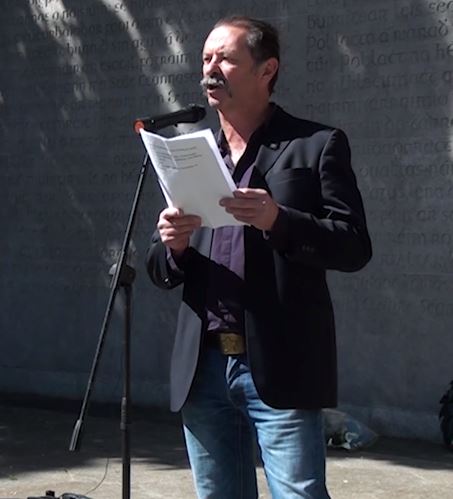 James Connolly fought and died for a Socialist Republic not the gombeen partitioned country with a divided people that the Counter Revolution installed. There is one thing in common between these two parts of Ireland the unelected power of private business determines the course of both economies through investment and production decision this give them total power over government no matter what party or jurisdiction we are talking about. What Unites the people is our labour power, our class. Without the workers capital is powerless. We have to set about reorganizing the economy so it is no longer dependent on private capital.

War has been declared on the working class all around the world under this neo liberal globalised economy that we now live. Let’s call it what it is. It is imperialism and under this imperialism 83% of all goods manufactured in the world are now manufactured in the Global South in sweatshops for slave wages with little regard for health and safety and total disregard for the environment.

As result of this super exploitation of workers in the poorest areas of the planet half a trillion dollars is shipped back to the richest countries from the profits earned on the backs of these exploited workers every year. Let’s put that in perspective it is the equivalent of 15,000 tonnes of gold being shipped back from the colonies to the motherland every year. That is twice as much gold in one year than was plundered in the entire 350 years since Columbus set sail. Neither slavery nor genocidal clearances of indigenous people or the worst excesses of colonialism could achieve a wealth transfer of this magnitude. What military Force could not achieve in the last couple of centuries market forces are doing on a massive scale every year and they called this foreign direct investment. Foreign direct Imperialism the plunder of the poorest people’s of the world goes on unabated.

I mentioned the bank bailout there so let’s look at the choices and priorities there. A bailout in my language is a helping hand a leg up or a dig out but not in capitalist speak like everything else in the capitalist world it is a business opportunity. We are being charged up to €7 billion a year to service this bailout and we still have to pay it back in its entirety. But that’s alright the interests of The Ruling Class is served big business survives and these massive debts accrued by them are paid off by you and me the people through tax increases, wage cuts, extra charges and the slashing of public services. Choices & priorities comrades.

As Connolly said government in a capitalist Society is but a committee to organise the affairs of the rich. Bailout I don’t think, sell out more like.

It is the greatest transfer of wealth from the working class to the rich in modern times. Seaní Fitz is still getting chauffeured in a Mercedes to his rounds of golf with his political & business cronies while the people pay off his debts.

Allied Irish Bank is now owned by the state and should be kept in state ownership as a national Development Bank. That’s a priority decision in the interests of the Citizens. The government have other ideas. Who will this benefit you and me or big business? The state wants to sell off Allied Irish Bank for a one-off short-term gain. If we retain the bank as a National Development Bank it’s investments will be made in the interest of the common good. It will take alot of the decisions on where the state is to invest out of the hands of private capital and will set the standard for other banks. The bank made a profit last year of over a billion. It makes no sense to sell it. Choices once again business gets priority over the people. There’s no doubt that if it is sold the new owners will “rationalise it” put another way “asset strip it” slash jobs cut pay and sell it on in a couple of years for a massive profit we’ve seen this time and time again way back to the Whiddy Island Oil refinery and more recently to the multiple sales of Telecom Éireann. Choices and priorities comrades.