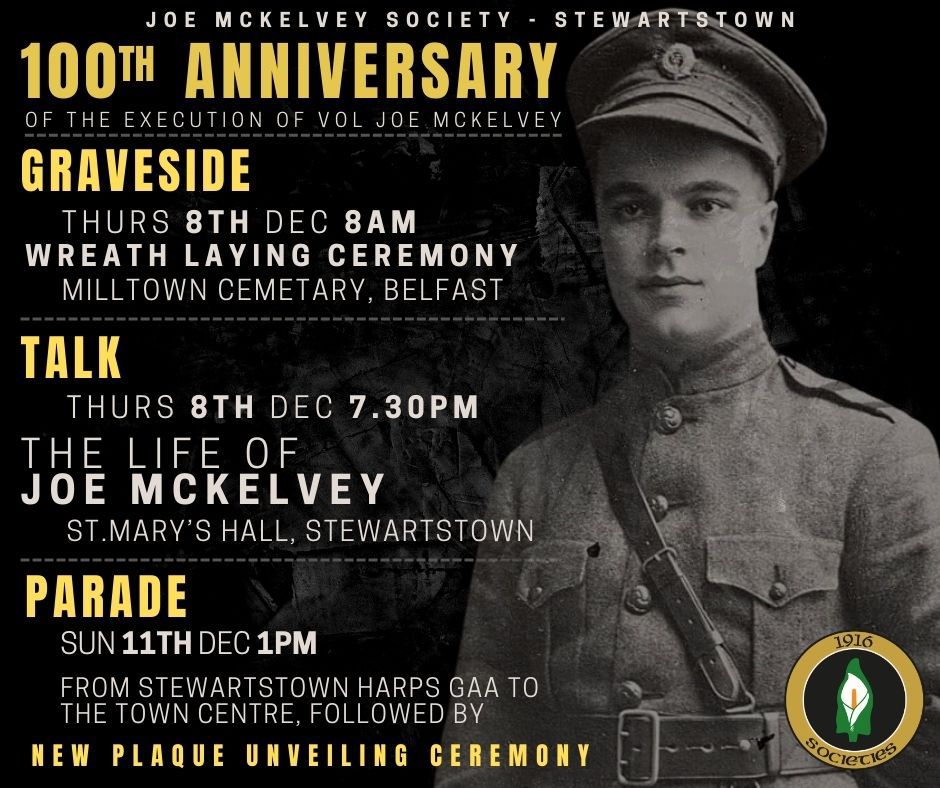 The Joe McKelvey 1916 Society Stewartstown, Co Tyrone are holding a series of events to mark the 100th Anniversary of execution of Lieutenant General Joe McKelvey. Joe, alongside his comrades Rory O’Connor, Liam Mellows and Dick Barrett where executed by Free State forces on the 8th December 1922.

In the morning of Thursday 8th December there will be a Wreath Laying for Joe McKelvey in Milltown Cemetery at 8am. There will be bus leaving Ann Street, Dungannon at 6.45am and Coalisland Park and Ride 7.00 am.

In the evening of Thursday 8th December at 7.30pm there will be a talk on the life of Joe McKelvey by Fergal McCluskey in St.Marys Hall Stewartstown.

On Sunday 11th December there will be a parade starting at Stewartstown Harps GAA grounds at 1pm. Which will makes its way to the town centre. This will be followed by wreath laying ceremony and a plaque unveiling.

Hope to see you all there. If you could please share and spread the word!

“The execution of republican leaders Rory O’Connor, Liam Mellows, Joe McKelvey and Dick Barrett 100 years ago had no basis in law and the only possible defence for the execution was that the Free State Government feared the state was in imminent danger”, a Supreme Court judge has said.

Mr Justice Gerard Hogan said “the decision to execute the four leading anti-Treaty IRA men on December 8th 1922, in response to the shooting dead of pro-Treaty TD Sean Hales a day earlier, was unprecedented as all four were shot without the benefit of a trial before a military tribunal.”

“You cannot put a rope around the neck of an idea: you can not put an idea up against a barracks-square wall and riddle it with bullets: you cannot confine it in the strongest prison cell that your slaves could ever build.”