The 1916 Societies condemn the outrageous behaviour of the RUC/PSNI at yesterday’s wreath-laying ceremony to remember the 29th anniversary of the Sean Graham bookmakers massacre. The unwarranted heavy-handed behaviour of the RUC/PSNI at this small wreath-laying by relatives was totally unjustifiable. It is absolutely disgusting to witness innocent civilians and survivors being treated in this way at the spot where their loved ones were murdered by a loyalist death squad, armed, controlled and directed by the British state. Those who legitimise and promote the RUC/PSNI as an impartial and acceptable police force must now account for these actions, these actions are on your watch, is this what was meant when you asserted that you would “put manners on them”, is this the parity of esteem you promised. Contrast the parity of esteem afforded to Mark Sykes, one of the survivors of the 1992 mass shooting, arrested and handcuffed like a criminal, contrast yesterdays RUC/PSNI assaults on relatives with the esteem and kid-glove treatment the RUC/PSNI afforded to the masked gang of UVF thugs. It stands in complete contrast with their facilitation of a ‘show of strength’ by masked UVF members engaged in intimidation in an east Belfast housing estate. 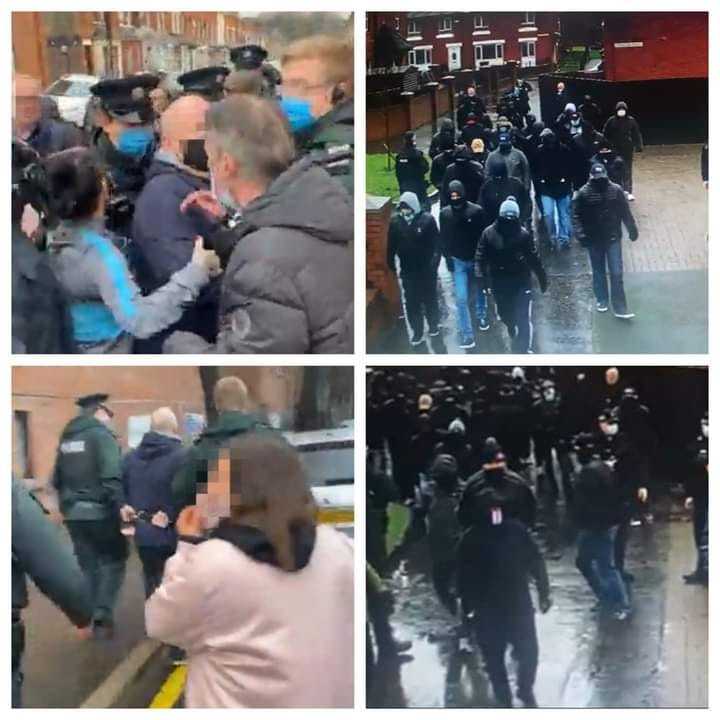 We believe the position of PSNI/RUC Chief Simon Byrne is untenable and we add our voice to the calls for his resignation in the wake of this incident, the latest in a series of acts of harassment and intimidation against the nationalist and Republican community at gatherings such as wakes and funerals. During a water protest in Jobstown, Tallaght in Dublin a number of years ago, Freestate minister Joan Burton complained of “poor people” owing expensive phones, what irked Burton was the fact that the truth of all of the incidents like Jobstown and Ormeau Road can be captured on video for the world to see despite government spin and lies.
The videos taken yesterday show how the RUC/PSNI jostled and assaulted relatives and survivors solely to disrupt the wreath-laying ceremony. They show the RUC/PSNI assaulting one young woman before arresting Mark Sykes at the spot where he was shot seven times by a UDA death squad.
Mark Thompson of Relatives for Justice, said the “disgraceful” assault took place amid an ongoing battle by the PSNI to prevent the publication of the Police Ombudsman’s report into the atrocity and to protect the RUC handlers and agents involved in the atrocity. “The PSNI vindictively decided to disrupt, insult and create unprecedented and callous hurt,” he said. “The very same institution – the PSNI – that has prevented and thwarted effective investigation into these killings decided to intervene in a safe and distanced commemoration. This is beyond outrageous and there must be immediate accountability. “This was not a public or community event. There was only a handful of relatives and survivors who sought to leave flowers at the spot where their loved ones had been gunned down with state collusion.”

On Thursday, the RUC/PSNI were also filmed as they stopped and harassed the funeral cortege of 85-year-old Turf Lodge woman, Rita McKernan as it made its way through West Belfast on its way to Milltown Cemetery. One PSNI/RUC man grabbed a young mourner with both hands around the neck before pushing him several yards and violently slamming him against a police vehicle, again all recorded on a phone. If those who administer British rule from Stormont cannot hold the police force they legitimise and promote to account, at least poor people with expensive phones will.

This video was made by the families of the Ormeau Road Bookmakers Atrocity and Relatives for Justice last week. It was due to be released yesterday evening following the discreet and small, socially distanced minutes silence, prayer and flower laying in memory of those murdered. Due to the despicable behaviour of the PSNI yesterday, this was postponed. However, despite the upset and trauma caused the families are determined that this video goes out today. A longer video will be posted early next week. Please view this video and circulate. It was these families who were attacked yesterday. The families deserve our support – the families deserve truth and justice.