The 1916 Societies intend to take part in a simulated Irish Unity Referendum in the Strabane-Lifford area organised by Irish Republican Socialist Party as part of their ‘Yes to Unity’ campaign. This will involve a canvass in the different areas around Lifford and Strabane during the month of November, which will be kicked off with a public meeting in Strabane library on Thursday 15th November at 7 pm. The main speakers at this event will be Sean Bresnahan representing the 1916 Societies, Tommy McKearney from the Peader O’Donnell Socialist Republican Forum, Ciarán Cunningham and Michael McLaughlin of the IRSP and Cllr Brain McMahon from Sinn Fein.

The 1916 Societies involvement in this project will be to promote a ‘32 County, All Ireland Referendum’ around the national question in line with our ‘One Ireland, One Vote’ campaign. The Societies key focus has always has been to create a fully democratic unitary state on this island. Our aim is to highlight and confront the democratic deficit that exists in Ireland. 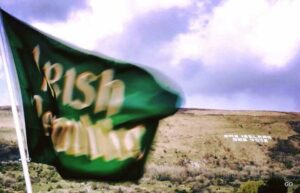 None this is to undermine the good work of the IRSP in their pragmatic approach to the National Question. Most Republicans abide by similar tactics. It should be recognised that a Border Poll is a dilution of Irish citizens’ rights, though in the present conditions it could be utilised as a mechanism to bring sovereignty back into hands of the people of this island.

The central element of creating a fully democratic Ireland is the emancipation of its people. The real power lies with them. The exchange of power isn’t just from one regime to another but rather to the people of this island.

The current mechanism which triggers a Border Poll requires the say so of someone who hasn’t received a single vote on the island of Ireland and is completely uncountable to its people. In the eyes of the 1916 Societies the best solution is for a 32 County Referendum, in which the entire island votes together as one.